Today’s birth story comes from Daenel. She blogs at Living Outside The Stacks. I’m loving her outfits, shoes and purses. Go on over and check her out after you’ve finished reading here.
Oh, and you can follow her a DaenelT on Twitter  and on her Facebook Page.
**********

On 11 September 1995, my husband and I showed up at the hospital for a routine OB visit.  The baby was due in nine days and, almost overnight it seemed, I had put on about 15 or 20 lbs and my pregnancy gait had shifted from cute pregnant lady strut to full on waddle.  Furthermore, the baby was bouncing all over the place.  One minute I’d feel a kick or a shove in one spot and then the next, I’d feel a stretch and a punch in another.  Don’t babies normally slow down the closer you get to the due date?

Anyway, Tony and two~year~old Symone waited in the waiting room while the doctor pulled out the measuring tape and measured my belly.  ”Hmmm,” he flipped through my chart, “where’s your ultrasound?”  I noted the apprehension in his voice and replied, “I only have the confirmation ultrasound but they haven’t done another since then.  Why?”  He looked at me over his paperwork, “Well, you’re measuring a little large.  How about if we get you in for an ultrasound?”

I rolled off the table (at that point, that’s all I could do), got dressed and told my husband that we were headed downstairs to get an ultrasound.  He gathered up the toddler and followed me to the elevator.

The tech finished scanning my belly and told me she was going to get my husband and the doctor.  I looked at the ultrasound and started to panic.  My baby was going to be a two-headed freak!  There on the screen were two baby heads, one pointed up and one pointed down.  When the tech returned, I asked her what I was looking at and she replied that I’d have to wait for the doctor.  This did not sound good.

The doctor and my husband both walked into the room at about the same time, my husband looked at the screen and started backing away as the doctor announced “TWINS!”  What?  You have got to be friggin kidding me?  Nine days before they’re due and now you’re telling us that we’re having twins? Wait, it gets better.

The doctor went on to explain that the hospital at Fort Polk, Louisiana didn’t deliver twins (especially high risk twins ~ who knew what condition my little monkey babies were going to be in when they arrived?) so we’d have to drive to Brooke Army Medical Center (BAMC) in Texas to have them.

The next day, we drove our two~year~old to Mississippi to my parents’ house and then drove down to Texas.  With me having contractions the whole way.  If you think pot holes are a pain in the butt on a regular day, try hitting them when you’re in labor.  Yep, all the excitement caused me to go into labor.

We arrived at BAMC, just in time for the doctors to decide that it would be too much to have the babies right then, so they stopped my labor.  Yes.  They stopped it.  I could have cried.  Then they started doing ultrasounds and stress tests to see how the babies were doing.  The entire time, we could only hear one heartbeat.  This was the case throughout my entire pregnancy ~ one heartbeat.  Finally, the doctors decided that I needed an amniocentesis but they didn’t really want to do it because they didn’t want to put the babies in any harm with a double stick (anesthesia and the hollow needle).  I told them to do it without the anesthesia. What was I thinking and why didn’t my husband slap me straight?  PAIN!!!!!

The amnio showed that the babies were developed enough to survive outside of the womb.  So on my original due date ~ 20 September 1995 ~ the doctors induced labor.  At this time, I would like to stop and thank my anesthesiologist because I felt absolutely nothing!

Jazmine was born at 11:40 AM and  was followed ten minutes later by Brandon.  Their birth was witnessed by my husband, the seven doctors and nurses  who worked on me, the six doctors and nurses for the babies, as well as fifteen to seventeen residents who watched from the observation platform.  I know this because we met one of the residents in the elevator when I was being discharged.  He proudly stated in the elevator before a group of onlookers, “Hey, I saw you have your twins!”  Yuck!

Fifteen years ago, I was surprised and doubly blessed with two beautiful babies who have grown up to provide me with love, laughter and a healthy dose of humility.  I love you them dearly and it has been an honor and a privilege to be their mother. 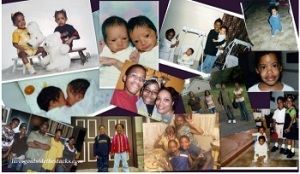 6 thoughts on “Birth Story of The Week : Surprise Twins”