I missed birth story of the week last week. We’ve been running all over town lately. Then when I’m home I’m cooking, cleaning, playing with the kids, doing laundry, you know how it is.

I’ve told George’s birth story more times than I care to count. At times I’ve been shy to share it because I truly feel that it was the ideal experience, and this is not in line with what most people consider to be “normal” for women, for childbirth. I can’t commiserate with those who had 70-hour labors or eventual c-sections, who say that childbirth is totally miserable but worth it. I came out of the experience wanting to do it again. Not eventually, right away. I say this not to be a braggart, but because I am coming to realize that it bears saying, and repeating. Women do not need to fear childbirth the way we’re taught to. Of course, some people will say I make these statements from a pretty sweet position, and I do. I was lucky, but I also let my body do its job, and was rewarded.
Three days before I gave birth, I looked like this: 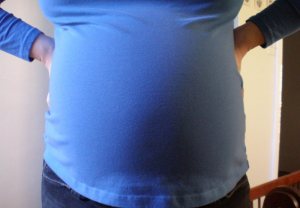 We spent the day before I went into labor (and, coincidentally, the day George was born) in Anacortes for Jess Lynch’s craft fair at the Adrift. It was a long, tiring but fun endeavor and as the fair wound down, it began to snow. Hard. Beautiful, big white flakes. The first (and, it turned out, last) snow of the Winter. I was momentarily excited, then remembered we had to drive home. We quickly said our goodbyes, Jess ushered us out the door and we made it home as the snow started to slow. We walked in, lit the Hanukkah candles and crashed.
At 2:45 I woke up with what I thought was mild cramping, no big whoop. I woke Nathan to say I was getting in the shower for some relief. All the ladies I had asked about labor told me I would know when real contractions hit. Without a doubt. YOU WILL KNOOOWWWW, they said. Ominously. I did not KNOOOOWWWW, so I figured this was not “it.” Like a fool, I parked the iPod outside the shower and, using the labor app I’d downloaded, tried to time what I had decided were not-really-contractions. I am still shocked that the iPod survived my waterlogged hands reaching out every two (that’s right, TWO) minutes to restart the timer. I shampooed my hair between waves and was less than thrilled to recall, after ten months, what it felt like to have cramps.
When I got out of the shower it was about 3:30am. I told Nathan to call Winni, our midwife, who asked me some questions, reassured me, then sleepily told me to try to get some rest and call her in the morning. We both assumed I was mis-timing the not-really-contractions, and I still felt that it probably didn’t much matter, as I wasn’t in labor.
I was experiencing what I’d consider fair-to-middlin’ menstrual cramps, so I took to walking laps around the livingroom, into the bedroom, and back. My cats trailed me from room to room, better aware than I was that something important was happening. Though I had taken the HypnoBabies home course, using what I’d learned didn’t occur to me; I was content to pace and breathe, my parade of pets behind me. Unfortunately, neither did it occur to me to get dressed, and in about 45 minutes, when those “fair-to-middlins” turned into “okay, ouches” followed immediately by I am having a baby right here in the living room, I was wearing nothing but underwear and a t-shirt. One pressure wave forced me to the floor, and while I rocked on hands and knees, Nathan called a questioning, shocked Winni back and she told us in no uncertain terms to GO NOW; she would meet us at the birth center.
In addition to being half naked, somehow, in all my preparation, I had not completely packed a bag. My duffel inexplicably contained graham crackers, a note to “remember the popsicles,” a pair of hilariously impractical underwear, a nursing tank top and two outfits for the baby. Nathan cobbled together an outfit for me, helped me into some pants and my coat and I went outside while Nathan loaded up the car. Until I felt the night air, I hadn’t noticed how sweaty and inwardly focused I’d gotten; it was so refreshing to stand, silent, while the town slept around me and Nathan ran back and forth from the house to the car. I realized that I was having a snow baby, just as I had predicted. Poor Nathan’s mantra during the thankfully brief ride to the birth center was “Don’t push; please don’t push.” I must’ve looked like the stereotypically ridiculous lady in labor, huffing and puffing futilely to make the urge to push lessen.

We walked into the birth center and Eloisa, the midwife who miraculously temporarily lived in the basement, appeared to welcome us into our candle-lit, warm and cozy room. There wasn’t much time for pleasantries. We said hi, she told me to strip and she checked me — 100% effaced, 100% dilated, bulging bag, ready to go. She started the tub water and I got the go-ahead to push. NOTHING in my life has ever felt better. I eased myself into the water and any pain I had been feeling was gone. The pressure of the baby was there, but the relief of the freedom to push and the soothing, warm water made everything better. Eloisa was invisible to me as I pushed; she was just an encouraging voice from somewhere behind us, telling me I was doing well. A few pushes later, I felt her put pressure on my perineum and she told me the baby was crowning. One more push and he was out, after 20 minutes of pushing, total. As Eloisa capped him, sucked out his nose and mouth and put him on my chest, he cried for a second, but opened his eyes and looked around, quickly calmed, I’d like to think, by the gentle way he was introduced to the non-womb world. Winni burst in, having been slowed down by the snowy roads, missing the birth by only a few minutes. It was 6:08am, less than 4 hours after the first signs of labor.

I never felt the urge to expel the placenta, so Winni and Eloisa helped me out of the tub and encouraged me to bear down. What followed the delivery of the placenta was the only hitch of the entire birth, and included a significant amount of blood, some deceptively-named massage that was more uncomfortable than anything preceding it and a shot or two in the leg that, combined with expert handling by my midwives, stopped the bleeding in short order. I needed two stitches — understandable, as a baby had practically flown from my nether regions — the discomfort of which were so minimal and lessened even more by a conversation with Winni about local music, food and friends-in-common that I couldn’t imagine having in a hospital, with a busy OB-GYN. While she worked on me, it was revealed that a certain someone had scored perfect apgars (genius), weighed eight pounds, one ounce and was 21 inches tall.

We hung out for awhile in the big, fluffy bed. We got pooped on repeatedly before wising up and busting out the diapers. We nursed somewhat awkwardly. We called around and sent photos from our phones. Winni brought me some delicious tea and we chatted about What the Heck Fest while Eloisa’s daughters woke up for the day and padded around the birth center in their jammies, giggling and peeking in the door to see our new baby. We got the then-unnamed but future-George dressed, and headed out about noon, into the gorgeous, clean, snowy day. My mom met us at home with veggie burgers, milkshakes and waffle fries and as we cuddled up in our own bed on our son’s first day in the world, I was so grateful for the way we were able to welcome him home.